The basilisk fountain is the only recently constructed element (2002) in the church square.
The fountain, based on Giorgio Cavalli’s design, has a quadrangular plant coming by Potentilla Tormentilla flower, very common in the territory and already represented in the municipal crest. 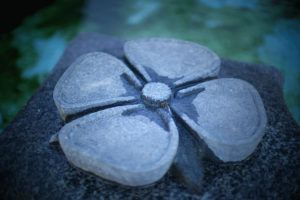 The four petals are basins whe sepals are small fountains oriented to the cardinal points. In the middle, a large oak stone block, coming from the local Quarem valley, holds a bronze sculpture made by the artist Luca Di Francesco, from Milan.

It represents the basilisk, Berzelesk in local dialect, a legendary reptile of which folk tradition tells about appearances  in the territory of Malesco and in the close Val Grande, one of the largest wilderness areas in Europe.

The monumental Church Square in Malesco includes all the following civil and religious buildings:

The fountain is in the square, always open to visit.

Available for visits throughout the year.

Go to the main Map with All Points of interest